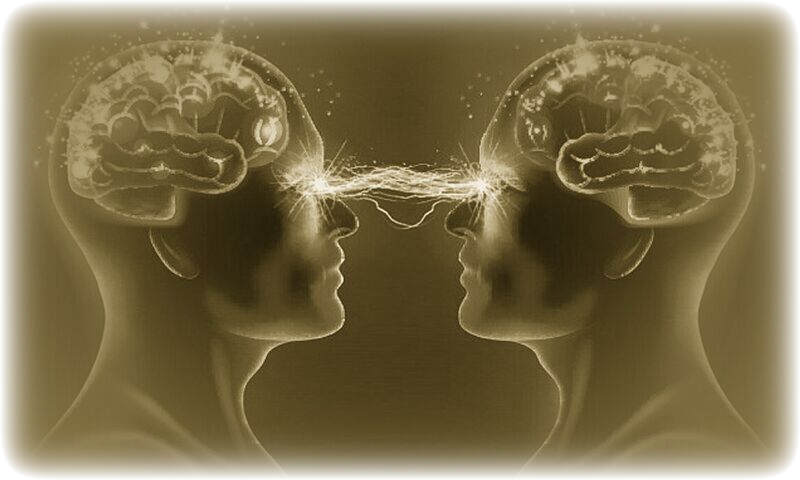 Telepathy is the mind-to-mind communication of thoughts, ideas, feelings, and mental images. In Psychical Research, Paranormal Investigation, and Mediumship, telepathy is considered as a potential medium for the transmission of data that appears to be paranormal in origin. Telepathy has been studied in parapsychology in controlled laboratory experiments and in Dream research. Telepathy can be both spontaneous and unconscious or deliberate through intention.

Telepathy was known to ancient peoples and is described in writings and oral lore. It has been regarded as both a natural human ability shared by everyone and as a special ability possessed by the naturally gifted, the specially trained persons, or religious adepts.

The term “telepathy” comes from the Greek tele (“distant”) and pathe (“occurrence” or “feeling”). It was coined in 1882 by Frederic W.H. Myers, a founder of the Society for Psychical Research (SPR). Myers thought “telepathy” expressed the nature of the phenomenon better than other terms used at the time, such as “communication de pensees,” “thought-transference,” and “thought-reading.” Myers said that telepathy involves more than thought, but also visual images, emotions, physical sensations such as pain, motor impulses which prompt recipients to action, and a host of other subtle impressions.

Psychical research interest in telepathy began in the late 18th century, when Franz Anton Mesmer popularized mesmerism, or animal magnetism. Magnetists discovered many magnetized, or hypnotized, subjects could read the thoughts of the magnetist and carry out mental instructions.

In the latter part of the 19th century, telepathy was observed regularly in the emerging field of psychotherapy and in phenomena related to Spiritualism. William James became interested in it and advocated Scientific study. When the SPR was founded in 1884, telepathy became the first psychic capability to be studied Scientifically, in an effort to find a bridge between the psychic and science. The study of telepathy was one of the three main objectives in the founding of the American Society for Psychical Research (ASPR) in 1885. James was among the first members who conducted experiments.

In 1930, J.B. Rhine began Extrasensory Perception (ESP) tests at Duke University in North Carolina, using playing cards and special decks with symbols, called first Zener cards and then ESP cards. Rhine discovered that it was often difficult to determine whether information was communicated through telepathy, Clairvoyance, or Precognition. He concluded that telepathy and clairvoyance are essentially the same psychic function manifested in different ways. Rhine also found that telepathy is not affected by distance or obstacles between sender and receiver. Rhine’s work inspired other tests, and, by 1940, little controversy remained in the Scientific community concerning the existence of extrasensory perception.

Various theories have been advanced over the centuries to explain how telepathy works; none is adequate. As Rhine discovered, psychic phenomena bleed into each other, and it is difficult, if not impossible, to separate and quantify different elements of a psychic experience.

The ancient Greek philosopher Democritus advanced wave and corpuscle theories. In the 19th century, William Crookes said telepathy rides on radiolike brain waves. Electromagnetic theories were posited in the 20th century. Carl G. Jung considered telepathy a function of the collective unconscious. More recently, telepathy has been seen as a function of nonlocal consciousness. It transcends both time and space.

Science still has little understanding of exactly how telepathy works. Certain characteristics have been observed, but they do not apply to all cases.

• It is closely tied to emotional states, both of the sender and receiver.
• Women are more likely to experience it than men.
• The telepathic faculty sometimes sharpens with age, perhaps because the physical senses become impaired as age advances.
• Telepathy can be induced in the dream state.
• Telepathy has biological connections: blood volume changes during telepathic sending and recipients’ brain waves change to match those of senders.
• It is adversely affected by dissociative drugs and positively affected by caffeine.
• It is more likely to occur during the full Moon, suggesting that gravitational or cosmic energy fields play a role in the process.

Psychical researchers and paranormal investigators have examined whether or not the effects of mediumship are products of telepathy. For example, a Medium might consciously or unconsciously send out mental expectations of results, which are in turn picked up by sitters. One product of this group mind might be spontaneous Psychokinesis (PK) effects. Another would be mental impressions of messages and Apparitions. (See Ideoplasty.)

Similarly, the thoughts and expectations of people involved in a paranormal investigation might unwittingly influence the results. For example, if one investigator has a strong mental impression of phenomena or witnesses phenomena, a telepathic impression may be transmitted immediately to others, who experience the same or similar phenomena. Places known to be haunted might acquire Thoughtform phenomena, the product of accumulated collective experiences impressed upon the minds of experiencers. The exact nature and role of telepathy in paranormal experience remains uncertain. Advances in science Demonstrate the interconnectivity of all things. Thus, the thoughts, feelings, and perceptions of individuals are automatically part of the collective mix in paranormal experience. The experience of paranormal phenomena should not be seen as isolated, objective events, but as part of a holistic experience.

To read more about Telepathy click on the next page