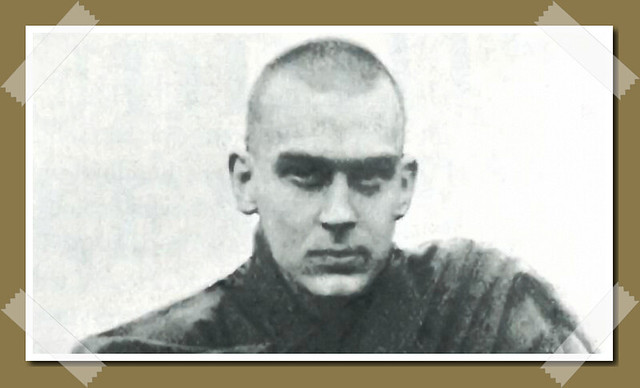 Allan Bennett, (1872–1923) was an English occultist and a principal member of the Hermetic Order of the Golden Dawn.  Allan Bennett was regarded by his peers as having an exceptional magical skill, and he was an early teacher of Aleister Crowley.

Bennett’s father died when he was young, and he was raised in the Catholic faith by his widowed mother. An asthmatic, he trained as an analytical chemist and worked as an electrical engineer. Bennett was attracted to occultism and magic and joined the Golden Dawn, rising to the rank of Adeptus Minor by the age of 23.

His magical motto was Yehi Auor, “Let there be light.” Charismatic, he radiated intense spiritual energy and power to others. He was renowned for his skill in ceremonial magic, notably the Evocation of the spirit Taphthartharath to visible form, a ritual that involved used of a pickled snake’s head in a “hell broth” of ingredients.

He possessed a Blasting Rod, a glass rod taken from a chandelier and consecrated with magical power. The rod was mounted in a wooden handle painted with words of power. Bennett changed the words in accordance with the purpose of his magical operations.

A Theosophist acquaintance once ridiculed the idea of a blasting rod and found himself paralyzed for 14 hours—an apparent lesson from Bennett. Bennett helped Samuel Liddell MacGregor Mathers, one of the founding chiefs, to organize the order’s materials, some of which were published later by Crowley as Liber 777.

In spring 1899, Bennett met Crowley when the latter was brought to a Golden Dawn meeting by C. G. Jones. Both were impressed with the other. Bennett believed Crowley to be under black magic psychic attack from a jealous William Butler Yeats, and the two devised a magical defence.

The friendship with Crowley led to Bennett moving in with Crowley in his London flat on Chancery Lane. While there, Bennett taught Crowley magical skills and shared with him Golden Dawn material—a violation of his initiation oath, for Crowley had not yet reached Adeptus Minor. It is possible that Mathers may have given Bennett his tacit permission to do so.

Toward the end of 1899, Crowley said that Bennett would die of his asthma unless he moved to a warmer climate. Crowley had ample funds to pay for such a move but Bennett declined to do so, believing that magical knowledge should be a gift and not purchased. Instead, Crowley evoked the Demon Buer, whose Powers reputedly included healing “All Distempers in Man “.  Crowley was assisted in the Ritual by Jones.

Buer made an appearance but was only visible as a helmeted head and a leg. The Ritual failed to aid Bennett's health. Crowley then persuaded one of his former mistresses to give Bennett the money he needed. Bennett turned to Buddhism and left England to study in the East. He gave up all his Possessions and joined a Sangha, a spiritual community, taking the spiritual names of Swami Maitrananda and then Ananda Metlaya.

He travelled to Burma. Years later, he returned to England as a missionary, founding a Buddhist lodge. Bennett eventually tired of Buddhism and returned to Western occultism. He retired to a small room that was unfurnished save for a table, his blasting rod, a few books, and machinery with which he hoped to establish communication with the astral plane.

Living again in England proved disastrous to Bennett’s health, and his asthma worsened, aggravated by his austere and poor lifestyle. He travelled to Liverpool and sought passage on a ship bound for a warmer climate, but the captain refused him because of the severity of his poor health.

Bennett was sent into a fatal tailspin of asthmatic spasms and convulsions. In his final days, he resigned from his Buddhist lodge. He died in 1923, leaving the locations of his manuscripts and other writings known only to a few close friends and associates.