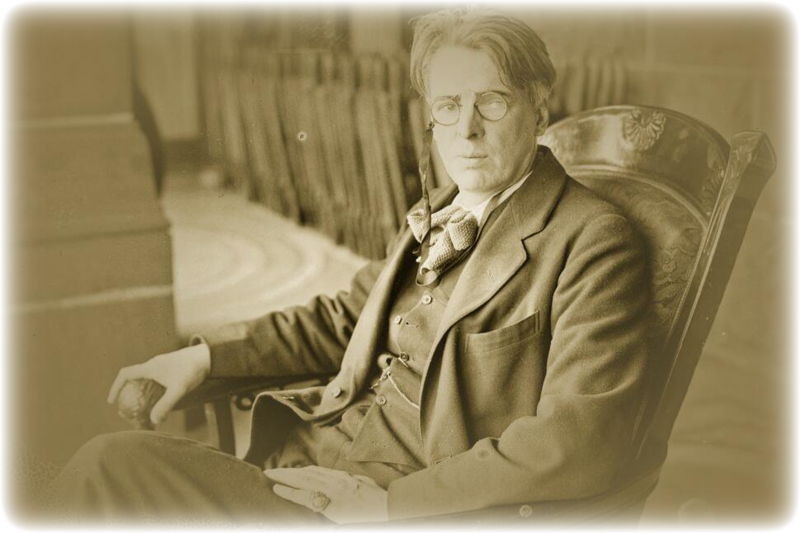 William Butler Yeats (1865–1939) was an Irish poet, playwright, Nobel prize winner, and member of the Hermetic Order of the Golden Dawn.

William Butler Yeats was born in Sandymount near Dublin on June 13, 1865, to a family with deeply divided religious beliefs. Yeats’s grandfather was a devout Anglican, an orthodox rector in the Church of England, while his father was a skeptic. With no clear religious direction provided to him early in life, Yeats followed his natural interests to occultism, mysticism, and Eastern religions and philosophies. He spent some of his childhood in Sligo, Ireland, where he became fascinated by Irish tales of ghosts and Fairies. He studied in both Ireland and London.

As a young adult, he became intensely interested in black magic and devil worship, which prompted him to read widely in occult literature. He described one Black Magic Ritual he attended in a darkened, small back room. The presiding magician, clad in a black hooded robe, sat at a table bearing a censer (see Tools), a skull decorated with magical Symbols, crossed daggers, an empty bowl, a book, and tools that resembled grinding stones. A black cockerel had its throat slit, and its Blood drained into the bowl. The magician read an Invocation. For what seemed like a long time, said Yeats, nothing happened. Then the various magicians present exclaimed that they were seeing visions in the room: a great moving Serpent, a ghostly monk, and moving black and white pillars. Yeats saw nothing, but felt a heavy oppression in the air, as though psychic black clouds were gathering about him in a threatening manner. Yeats felt in danger of being entranced by something evil. With great mental effort, he vanquished the clouds and asked for the lights to be turned on. After an Exorcism, he felt better.

In 1888, he joined the Theosophical Society and met Madame Helena P. Blavatsky. When Blavatsky established the Esoteric Section of the society for members who wanted to learn the principles of Magic, he was among the first to join. But the section’s dismal track record in magical experiments discouraged Yeats.

In 1890, Yeats joined the Golden Dawn and took the Magical Motto Demon est Deus Inversus (“The devil is the reverse of God”), a reflection of his deep interest in the diabolic. He was much happier with the Golden Dawn’s Western occultism, rather than the Eastern approach advocated by Blavatsky. He was especially impressed with the magical ability of Samuel Liddell MacGregor Mathers, one of the three founders—although later he referred to Mathers as “unhinged” and “half lunatic, half knave.”

Yeats became embroiled in the turmoil stirred up by Aleister Crowley, who was told by Allan Bennett that he (Crowley) was under Psychic Attack from Yeats because Yeats was jealous of his superior ability as a poet. Crowley and Bennett responded with a defensive psychic attack. Yeats was head of the Second Order when Crowley attempted to take control in 1900, and he called in the police to have Crowley removed from the premises of the London temple. However, Yeats was unable to stop the disintegration of the troubled organization, and in 1901 he resigned from his position. He maintained an association with the Golden Dawn for another 20 or so years.

By his own account Yeats’s interests in Magic and mysticism had a profound influence on his writing. He compiled a book on fairies, Irish Fairy and Folk Tales (1892). He took an interest in Spiritualism and lectured at the London Spiritual Alliance.

Yeats’s accomplishments in the literary world are numerous. His first published work, the play Mosada, appeared in 1886. He was a founder of the Rhymers’ Club in London and was a major figure in the establishment of the Irish Literary Theater in 1899. He served in the Irish Senate from 1922 to 1928. In 1923 he was awarded the Nobel Prize for literature.

Yeats was a great admirer of the actress and occultist Florence Farr and wrote plays with her intended as the lead actress. He was married late in life, in 1917, to Georgia Hyde Lees. After they were wed, Yeats discovered that Georgia had mediumistic abilities and could do automatic writing.

Yeats died in Roquebrune on the French Riviera near Monaco on January 28, 1939. He was buried there, and nine years later his remains were moved to Drumcliffe, near Sligo.

Annie Horniman (1860–1937) was a wealthy tea heiress, dramatist, and member of the Hermetic Order of the Golden Dawn. Annie Horniman was born on October…

This book contains 64 Irish folklore which presents the Irish life and culture from the nineteenth century. In this book, it has many stories of…

Florence Beatrice Farr (1860–1917) was an English actress, occultist, and an important member of the Hermetic Order of the Golden Dawn. Florence Farr was born…

Allan Bennett, (1872–1923) was an English occultist and a principal member of the Hermetic Order of the Golden Dawn.  Allan Bennett was regarded by his…