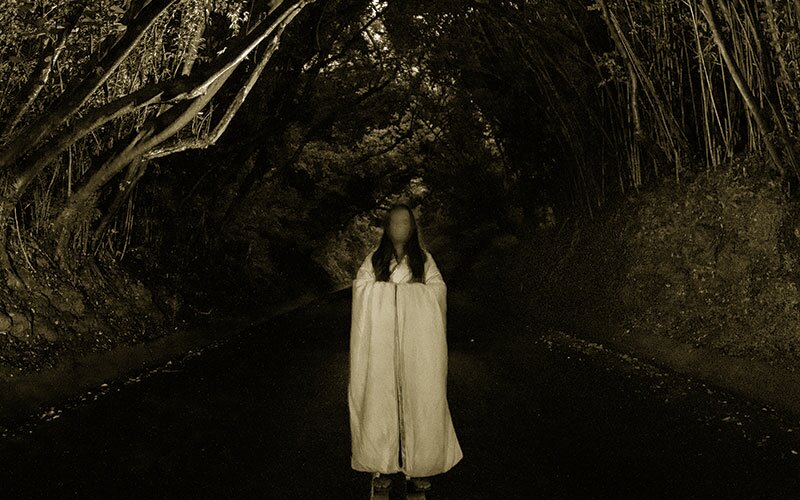 A Faceless Woman is a type of Ghost who appears in Haunting legends and folklore around the world. The ghost is a beautiful woman, usually seen first from behind, who terrifies people when they discover she has no face. Often classed as an urban legend, the Faceless Woman has old origins.

Lafcadio Hearn, one of the first Westerners to study the folklore and traditions of Japan, documented old stories about the Mujina, a faceless ghost in the form of either sex, in his book Kwaidan (Weird Tales), published in 1904.

One story came from a merchant man and took place in Tokyo on the Kii-no-kuni-zaka, a slope of the Akasaka Road. It resembles more contemporary versions that fit an urban legend motif. According to the merchant, he was hurrying up the slope late one night when he saw a woman crouching by the moat, weeping bitterly. She was young, slender and well dressed and wore her hair in a style that indicted she came from a well-to-do family. He stopped to offer her assistance. She continued to weep, hiding her face in the long sleeves of her garment. The merchant continued to plead with her not to cry and to allow him to help her.

Suddenly she turned her head toward him, stroking her face. He saw that she had no face. He screamed and ran away up the Kii-no-kuni-zaka. The merchant dared not look behind him, and he didn’t stop until he saw the gleam of a lantern. It proved to belong to a soba man (seller of buckwheat noodles) who was resting on the side of the road. The merchant flung himself down beside the man, out of breath. Haltingly, he told the soba man about the girl, adding, “I cannot tell you what she showed me.” “Was it anything like this that she showed you?” asked the soba man, stroking his own face. The merchant saw that the man had no face—and then the light in the lantern went out.

In Hawaii, a Faceless Woman began making appearances in Honolulu at the Waialae Drive-In in 1959. A newspaper article reported “rumours” that a girl had encountered one such ghost in the restroom of the drive-in. According to one version, the girl went into the restroom and saw another woman standing in front of the mirror, combing her long, beautiful hair. The girl approached, and the woman turned slightly. The girl saw that she had no face.

Supposedly, she was so frightened that she had a breakdown and had to be hospitalized. In another version of the story, the girl went into the restroom about midnight to refresh her lipstick. In the mirror, she saw a figure behind her with long hair and no face. Then she observed that the figure had no legs. When she turned around, no one was there. She screamed and fainted. Whether or not these stories were true, the story took hold, and other sightings of the Faceless Woman were reported at the drive-in.

After the drive-in was torn down to make way for a housing development, the Faceless Woman (and often legless as well) was sighted around Oahu. She appeared at a wedding reception at a Waikiki hotel, in a shopping mall and at the Kapi’olani Community College. Sightings have continued over the years.

By Wiris of Malaysia A friend told me that this happened to her brother and his wife. One night, while driving their car along a…

I heard this story from a talk show when I was in Taiwan. It was a weekly session at midnight when the special guests (singers,…

In this collection of classic ghost stories from Japan, beautiful princesses turn out to be frogs, paintings come alive, deadly spectral brides haunt the living,…

Once there was this widow who had two children – a boy and a girl. Her son was seven years old and in a peewee…