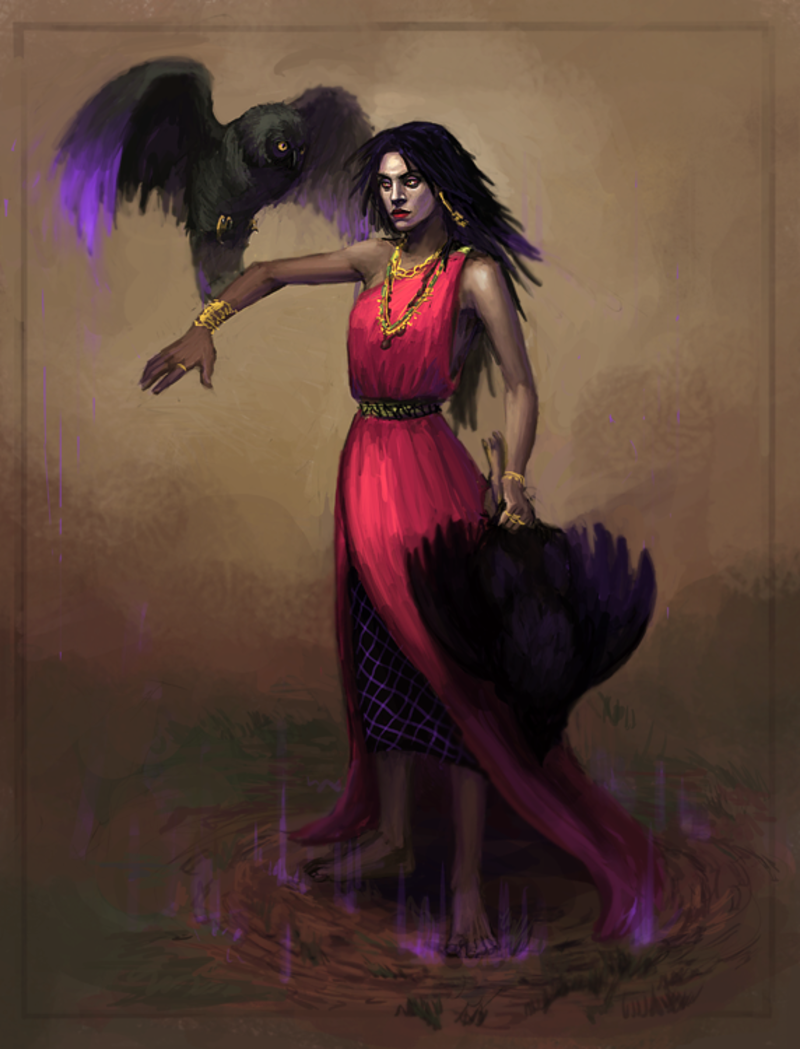 The Haitian Revolution was initiated at a Vodou ceremony at Bois Caiman when a priestess (Mambo) sacrificed a black pig, invoking the lwa, Ezili Dantor, and Ogun. Marinette may be that priestess, now deified and a lwa herself. (She still maintains positive relationships with Dantor and Ogun.) Marinette, a mysterious, solitary lwa, belongs to the Petro and Bizango pantheons.

Marinette had a difficult life. She is a bitter spirit who prefers to be alone. People disappointed her. Rather than being celebrated as a heroine, she was first aggressively pursued by French colonial forces, then denied glory when Haitian revolutionary leader Toussaint L’Ouverture banned women from battle front-lines. Even now she is frequently dismissed as an evil spirit while her male contemporaries are lionized. She is a spirit of rage and frustration but also, in her way, a spirit of justice.

She is a controversial spirit. Many insist that she should never be invoked, as she is dangerous and hostile. She is certainly not a spirit for beginners. (You can’t fool her: as a priestess, she can immediately distinguish an adept from a novice.) Marinette is never enshrined or invoked within the home (or inside buildings, period), as it is considered unsafe—she literally burns with rage and has a tendency to burn down buildings while within them, whether intentionally or not.

Marinette is invoked by secret societies as well as experienced initiates and sorcerers to provide disciplinary action against malefactors. She chafes at abuse of power and liberates devotees from bullies and oppression.

• Marinette is the matron of werewolves and loups-garoux.

• Marinette is syncretized to Joan of Arc or the Anima Sola.

Marinette is described as left-handed, symbolic of her willingness to work with sorcerers for hire and to fulfill less than ethical requests. Her eyes are red, indicating her state of rage. Her appearance is avian. Her hands and feet may resemble claws.

Ezili Zandor Ezili Zandor is the matron of the Haitian sorcerers’ secret societies known as The Red Sects. She is a great sorceress and the…

Justice awaits beyond the grave. Sometimes justice emerges from the grave. Baron Kriminel is a fierce spirit of justice. He is custodian of the graveyard,…

Loup Garou Plural: Loups Garoux The loups-garoux of Haiti and the French Caribbean are a fusion of Breton werewolf traditions and African secret sorcerers’ societies.…