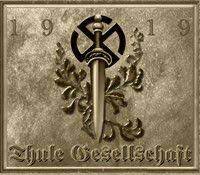 Dedicated to the rebirth of Aryan/Teutonic supremacy, the resurrection of Nordic mysticism, and the defeat of Christianity, the Thule Society prepared the path for the advent of the master race. During the late nineteenth century Cyrus Read Teed, a former Union army Medical Corps physician, claimed a civilization inhabited the concave inner surface of Earth. Teed made a religion of his discoveries and changed his name to Koresh, the Hebrew equivalent of his given name, Cyrus. As the messiah of Koreshanity, he formed a church and founded a community on a three-hundred-acre tract in Florida in 1894. He lived there with about 250 followers until 1908.

In 1871 the occultist Edward Bulwer-Lytton’s novel The Coming Race stirred imaginations around the world with an account of the subterranean master race who used the Vril force to sustain their secret hollow-earth empire. Extraterrestrial in origin, superior to everyone above or below the soil of Earth, the ancestors of the Aryans have monitored the growth of the surface nations.

In the eclectic cosmology that made up Nazi occultism,“Ultima Thule” was the capital of Hyperborea, the land of the superbeings who inhabited the hollow earth. The Thule Society was founded in 1910 by Felix Niedner, the German translator of the Eddas , Old Norse poems from the medieval manuscript Codex Regius , written sometime in the thirteenth century. The Munich branch of the society was established in 1918 by Baron Rudolf von Sebottendorf (Rudolf Glauer), who while living in Istanbul in 1910 had formed a secret society that combined esoteric Sufism, Freemasonry, and the creed of the Hashshashin.

In 1912 Sebottendorf returned to Germany, where he became a member of a secret anti-Semitic lodge known as the Order of Teutons. Baron von Sebottendorf was also conversant with the Bavarian Illuminati, the Knights Templar, the Holy Vehm, the Golden Dawn, the German Order Walvater of the Holy Grail, and Rosicrucianism. Baron Rudolf may have borrowed some concepts and rites from such groups, as well as the Theosophists and various Hermetic schools, but certainly his group, like many other German secret societies, placed special emphasis on the innate mystical strength of the Aryan race.

Mme Helena Blavatsky had listed the Six Root Races—the Astral, Hyperborean, Lemurian, Atlantean, Aryan, and the coming master race. The Germanic/Nordic/Teutonic people were of Aryan origin,and perhaps by forming a group named after the gateway to the other worlds, Ultima Thule, Baron Rudolf sought to Demonstrate to supermen in the hollow earth the Thule Society’s earnestness to please.

The Hyperboreans, the master race in the earth’s interior, usually remain aloof from the surface dwellers, but thousands of years ago they did colonize certain regions of the planet and left such people as the Celts, the Norse, Bretons, Spaniards, and Portuguese with an infusion of certain of their extraterrestrial memories in their minds and evidence of their Rh-negative blood types in their genetic transfer. Those human witnesses who claim to have encountered representatives of the Elder Race describe them as humanoid, but extremely long-lived, and say they give evidence of predating the human species by more than a million years.

In 1920 the Nazi Party was created by the Thule group. The Thule Sonnenrad (Sun Wheel) was used as inspiration for the Nazi flag and symbol. Hitler and his inner circle had a firm belief in Atlantis and in the superior race that had withdrawn from the surface world and prospered within the hollow earth. These ancient masters, who were likely extraterrestrial in origin, continued to monitor the new race of surface dwellers and from time to time had given humankind a boost up the evolutionary ladder. They were closely observing the Earth nations at this time to determine which people they would invite to inherit their wealth of technological knowledge. The Nazis were determined that it would be the German people who would become the heirs of the Master Race.

So great was the Nazi belief in the supermen who dwelt in the Hollow Earth that in April 1942 Nazi Germany sent out an expedition composed of a number of its most visionary scientists to seek a military vantage point in the hollow earth. Although the expedition of leading scientists left at a time when the Third Reich was putting maximum effort in their drive against the Allies, Göring, Himmler, and Hitler are said to have enthusiastically endorsed the project. Steeped in the more esoteric teachings of metaphysics, the führer had long been convinced that Earth was concave and that a master race lived on the inside of the planet.

The Nazi scientists who left for the island of Rugen had complete confidence in the validity of their quest. In their minds, such a coup as discovering the opening to the Inner World would not only provide them with a military advantage, but it would go a long way in convincing the Masters who lived there that the German people truly deserved to mix their blood with them in the creation of a hybrid master race to occupy the surface world. The extravagant effort to make contact with the Hyperboreans was unsuccessful.

In his book Shambhala , author and adventurer Nicholas Roerich writes of his curiosity about the universality of the legends of the underpeople:

“You recognize the same relationship in the folklores of Tibet, Mongolia, China, Turkestan, Kashmir, Persia, Altai, Siberia, the Ural, Caucasia, the Russian steppes, Lithuania, Poland, Hungary, Germany, France; from the highest mountains to the deepest oceans.… They tell you how the people…closed themselves in subterranean mountains. They even ask you if you want to see the entrance to the cave through which the saintly persecuted folk fled.” Throughout the world, Roerich emphasizes, one hears the same “wondrous tale of the vanished holy people.… Great is the belief in the Kingdom of the subterranean people.”

The Occult Roots of Nazism: Secret Aryan Cults and Their Influence on Nazi Ideology – Nicholas Goodrick-Clarke

Unholy Alliance: A History of Nazi Involvement with the Occult – Peter Levenda

The Nazis and the Occult – Dusty Sklar

The Spear of Destiny: The Occult Power Behind the Spear which pierced the side of Christ – Trevor Ravenscroft

The Nazis and the occult : the dark forces unleased by the Third Reich – Roland, Paul

swastika An ancient and potent sacred and magical Symbol. The swastika is a cross with bent arms of equal length that appear to rotate in…

“As I drew near and nearer to the light, the chasm became wider, and at last I saw, to my unspeakable amaze, a broad level…

The UFOs are piloted by an ancient underground race who remain undecided whether to enslave or to assist the surface dwellers. According to Ray Palmer,who…