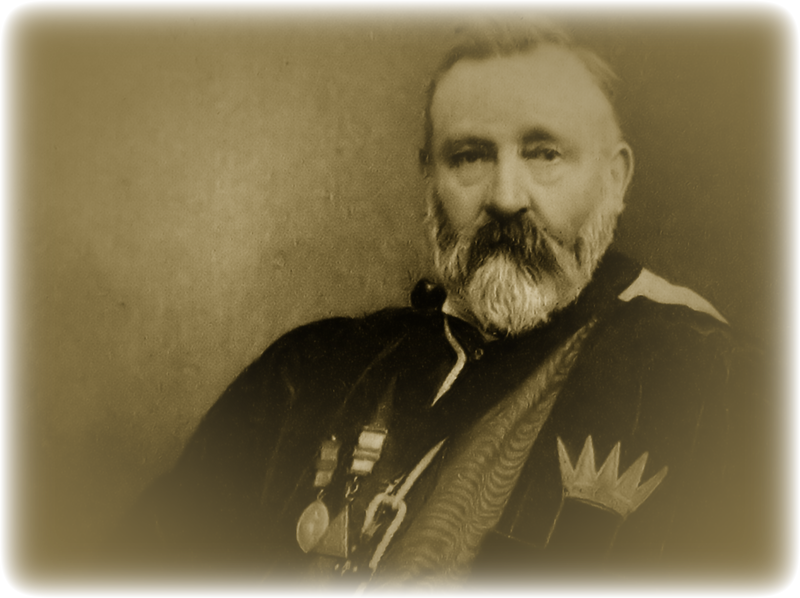 Westcott was born on December 17, 1848, in Leamington, Warwickshire, England. His father was a physician. His parents died when he was 10 years old, and he was adopted by an uncle, who also was a physician. Westcott received a good education and graduated from University College in London with a bachelor’s degree in medicine.

He entered into his uncle’s medical practice in Soberest. His peers described him as industrious and scholarly, with a special interest in histrionics and regalia, which may account for his interest in ceremonial Magic. His only relationships with women were platonic. His professional career advanced, and in the early 1881 he became deputy coroner for Hoxton.

In the early 1890s he was named coroner for northeast London. Because of his professional standing, he kept his occult interests and activities secret. In 1875 Westcott joined the Masonic Lodge at Crewkerne, England, and rose in its ranks. In 1878 he embarked on a two-year hiatus to Hendon, England, where he studied the kabbalah and other esoteric subjects.

Sometime prior to 1878, he joined the ROSICRUCIANS in the Societas Rosicruciana in Anglia (S.R.I.A.), open only to high-grade Freemasons. In 1890 he became MAGUS of the S.R.I.A., followed by the positions of Worshipful Master of the Research Lodge and Quatuor Comati. He also joined the Theosophical Society, where he lectured, and became an honorary member of the Hermetic Society, a breakaway group that formed in 1884.

The Hermetic Society may have served as the inspiration for Westcott to form his own group. Westcott likely met Samuel Liddell MacGregor Mathers at the Societas Rosicrucianas in Anglia (Rosicrucian Society in England), where they both were members, along with William Robert Woodman. In 1887 Westcott recruited Mathers and Woodman to form the Golden Dawn, based (unknown to Mathers and Woodman) on a falsified occult legacy that probably was created by Westcott.

Regardless of its origins, the Golden Dawn became, in its meteoric short life, the most influential magical order of the Western mystery tradition. Westcott’s Magical Motto was Sapere Aude, “dare to be wise.” Westcott became one of the three Chiefs of the Esoteric Order, and then one of the members of the Second Order. He resigned from the Golden Dawn in 1897 when his esoteric interests became known in his professional circles and were problematic.

At the same time, his falsification of documents authenticating the Golden Dawn’s alleged esoteric heritage were being threatened for exposure to members and may also have influenced his decision to resign. However, he remained a member of the Rosicrucians and soon became supreme magus. In 1918 Westcott retired from his career and moved to the Republic of South Africa, where he lived with his daughter and son-in-law.

He became vice president of two lodges of the Theosophical Society there. Westcott died in South Africa on June 30, 1925.

WESTCOTT, WILLIAM WYNN
English occultist and Freemason, 1848–1925. One of the most influential figures in British occultism in his time, Westcott was born at Leamington, Warwickshire, the son and nephew of physicians, and studied medicine in turn. In 1871 he joined his uncle’s medical practice and began his lifelong involvement with secret societies by being initiated into the Freemasons. In 1876 he became a member of the Swedenborgian Rite, a small Masonic offshoot based on the mystical teachings of Emanuel Swedenborg. In 1879 he set aside his medical practice for two years of intensive study and practice of occultism, and in the midst of this retreat, in 1880, he joined the Societas Rosicruciana in Anglia (SRIA), the most influential Masonic esoteric order in England at the time. See Freemasonry; Societas Rosicruciana in Anglia (SRIA).

At the end of his magical retirement in 1881, newly married and with a daughter on the way, Westcott moved to London and entered the civil service as a deputy coroner. In 1883 he was elected to the secretive Society of Eight, an order founded by the eccentric occultist Kenneth Mackenzie for the study and practice of alchemy. On Mackenzie’s death in 1886 Westcott became Supreme Grand Secretary of the Swedenborgian Rite, and received all Mackenzie’s Swedenborgian papers from his widow. Along with them, the evidence suggests, he received a manuscript in a simple cipher giving outlines of rituals for an occult secret society called the Hermetic Order of the Golden Dawn. See Mackenzie, Kenneth.

These rituals fired Westcott with the ambition to create a magical lodge of his own. With the help of fellow Freemason and occultist Samuel Liddell Mathers, who turned the ritual outlines into fully workable ceremonies, Westcott launched the Hermetic Order of the Golden Dawn in 1887 and served as one of the order’s three ruling chiefs, writing many of its lectures and managing its training program. In 1897, however, Westcott was forced to resign his membership after someone informed the Home Office of his involvement in a magical society and he was told to choose between his order and his job. Westcott’s resignation left Mathers in charge of the order, which led to the Golden Dawn’s collapse in the early 1900s. See Hermetic Order of the Golden Dawn.

Westcott had remained active in the SRIA, and was elected its Supreme Magus in 1892, and was also involved in the Esoteric Section of the Theosophical Society, studying practical occultism with Helena Blavatsky until her death in 1891. The SRIA became the focus of his activities after his departure from the Golden Dawn. In 1918 he retired from the civil service and moved to Durban, South Africa, to live with his daughter and son-in-law. He died there in 1925. See Blavatsky, Helena Petrovna; Theosophical Society.