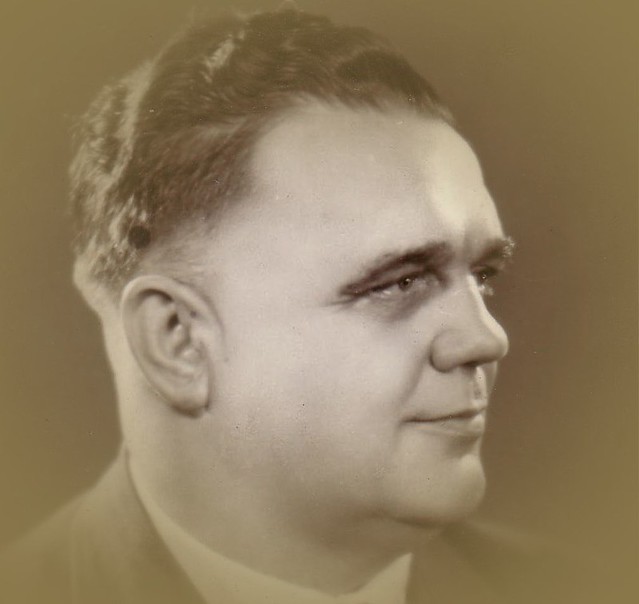 Franz Bardon (1909–1958) was a Czech occultist, Hermetic Adept, and magician whose work has influenced magical methods and practices. Franz Bardon is widely regarded as one of the most knowledgeable occultists of the West.

Bardon was born on December 1, 1909, in Katherein, near Opava, Czechoslovakia. His father, Viktor, was a devout Christian mystic. Bardon’s devoted student and secretary, Otti Votavova, encouraged the legend that Bardon was not born as an infant but was a highly evolved Hermetic adept who entered the Earth plane in 1924 by coming into the body of the 14-year-old boy known as Franz. In popular New Age terminology, this would make him a “walk-in.” His purpose was to aid and initiate his father, who was stuck in his spiritual development.

As Franz Bardon, he was the oldest of 13 children. He attended public school and then apprenticed as an industrial mechanic in Opava. He married a woman named Marie. In the 1920s and 1930s, he gained recognition as a stage magician in Germany; his stage name was Frabato the Magician.

His ordinary life masked a remarkable occult life. Bardon formulated his own system of magic and developed alchemical recipes for medicine purported to have amazing powers of healing. His work shows influences by Aleister Crowley, Francis Barrett , Eliphas Levi, and the Tibetan occultism of Alexandra David-Neel .

After the Nazis gained power, they persecuted members of Freemasonry, the Ordo Templi Orientis, and other magical lodges and orders. Hitler and some of his friends reportedly were members of the Thule Order, the external organization of some Tibetan black magicians. According to Votavova, they also were members of the FOCG or 99 Lodge, which Bardon later described in his autobiographical novel, Frabato the Magician. Bardon maintained that he was never a member in any magical lodge or order; however, according to some sources, he was a member of the Fraternity of Saturn, a German order important in the early 20th century.

To avoid notice by the Nazis, Bardon urged a student and friend, Wilhelm Quintscher, to destroy all their correspondence. Quintscher failed to do so, and in late 1941 or 1942, he and Bardon were discovered and arrested. In prison, they were tortured and whipped. Quintscher broke down and uttered a kabbalistic formula to immobilize the torturers. The Nazis were able to break the spell and then shot him to death in retaliation.

Hitler offered Bardon a high position in his Third Reich in exchange for Bardon’s magical help to win World War II. Hitler also wanted Bardon to reveal the identities and locations of the lodges that were part of the legendary 99 Lodge of adepts. Bardon refused and was severely tortured. He was subjected to operations without anesthesia and was confined in iron balls and chains.

Bardon was interred in a Nazi concentration camp for three and a half years. In 1945, he was sentenced to death, but the prison was bombed to ruins before the sentence could be carried out. Russian fellow prisoners helped him escape from the ruins. Bardon hid until the end of the war, when he made his way back to Opava.

According to Votavova, Bardon used his magical abilities when the war was over to discover that Hitler had survived and fled the country into hiding. He said Hitler underwent magical operations to alter his appearance so that no one would ever recognize him.

After the war, Bardon worked as a naturopath and graphologist and resumed his occult study and writing. He is said to have cured cancer. His work was published beginning in 1956, which drew attention to him, and people sought him out for healing. He also came to the attention of the repressive communist Czech regime, which discouraged occult work.

Bardon was arrested in Opava on March 28, 1958, during a communist purge. According to Votavova, he was accused of being a spy for the West; however, other accounts say he was accused of making illegal medicines, that he was accused of not paying taxes on the alcohol used for his medicines, or that he said treasonous things about his country in a letter he sent to Australia.

He was imprisoned for about four months and then suddenly died on July 10, 1958, under “unusual circumstances” in a prison hospital in Brno, Czechoslovakia. It has been speculated that he committed a sophisticated suicide. Bardon was severely ill for the last years of his life, suffering from obesity, blood pressure problems, and pancreatitis. Supposedly he could not use his advanced powers of healing and psychic ability to heal himself because doing so was forbidden by karmic laws. Three days before his death, he asked his wife Marie to send to him “speck,” or fat bacon, which could have compromised his health because of his pancreatic condition.

He was rumored to have discovered the Elixir of Life. His body was dissected twice, adding fuel to those rumors. Bardon’s occult, magical, and alchemical books and manuscripts, along with his magical talismans, amulets, and rings, were confiscated by authorities and were never returned to his family.

Bardon is renowned for four books. His first, Initiation into Hermetics, published in 1956, is his most impressive, comprehensive, and influential. In it, he puts forth an energetic model of the magical universe, drawing on Hermetic and Eastern philosophies. In Part I he presents his theory, and in Part II he presents a 10-step program of mental, physical, and psychic training. He called all of his disciples magicians, the word being “a symbol of the deepest initiation and the highest wisdom.”

According to Bardon, the cause of all things existing is the akasha, an Eastern term for what the alchemists called the quint essence, or Fifth Element or power. In Bardon’s universe, electric and magnetic fluids are comparable to yin and yang. Electric fluids (masculine, or yang) are warm, positive, and red in color, and magnetic fluids (feminine, or yin) are cool, negative, and blue in color. Together they make up the vital power or life force, which Baron Karl von Reichenbach earlier called the “od” or “odyle” force. Bardon occasionally used von Reichenbach’s term od. According to Bardon, every part of the body is governed by either electric or magnetic energy or is neutral. Disease arises when imbalances occur.

Bardon said that the human being is superior to all spirits, including angels and Demons, because a human is tetrapole, or four-pole—that is, composed of all four elements. Each element has its own energetics, and a magician must learn how to balance his or her own elements before proceeding any further in magical training. Failure to learn this results in failure in magical work and is hazardous to the magician. The harmonizing and balancing of inner elements is accomplished through self-observation, meditation, recording of one’s strengths and weaknesses, and remedial measures. This enables the magician to have control over the beings of the elements and elemental realm.

Other instructions address proper concentration and breathing, including a special breathing through the skin; visualization and element manipulation; rituals; Levitation; astral travel ; development of psychic abilities, such as clairvoyance and clairaudience; use of magic mirrors for astral travel and healing; gaining access to higher spiritual levels; and the preparation and use of fluid condensers, magical tools for the manipulation of electric and magnetic forces. Bardon provides instructions for “loading” tools with magical energy.

Bardon’s second book, The Practice of Magical Evolution, is a monumental ceremonial magic grimoire on the making and use of magical tools, the proper evocations of numerous spirits, and the dangers of pacts with spirits. To evoke a spirit, the magician works in a proper magical environment to create a sphere hospitable to the entity. He enters a trance and projects his consciousness into the sphere and then calls it back. Bardon said that he contacted all of the named spirits himself and omitted many more because he thought they were unsuitable for beginners.

Bardon’s third work is The Key to the True Kabbalah, in which he gives a unique system based on the sounds of letters of the alphabet. He presents a method of empowering letters and combining them using magical keys to create magical effects.

His fourth work, Frabato the Magician, is a novel that at the time of his death was incomplete and consisted mostly of notes. It was fleshed out and finished by Votavova and was revised by the publisher, Dieter Ruggeberg. Votavova vouched that the story was Bardon’s own spiritual autobiography, and Ruggeberg vouched for Votavova. According to Votavova, Bardon’s prior past life was as Mahum Tah-ta, a Tibetan wise man who lived in the mountains. He also was connected to Apollonius of Tyana, hermes Trismegistus, Lao Tzu (see I CHING), Robert Fludd, Nostradamus, and Comte de Saint Germain. According to Ruggeberg, two portraits in the book, of Hermes Trismegistus and Lao Tzu, were painted by Bardon with the help of a magic mirror.

The title is Bardon’s stage magician name. The story describes his arrival into the body of a 14-year-old boy, his stage magic work, his secret life as an adept in the Brethren of Light brotherhood, his magical battles with the FOCG black lodge, his escape from Germany before World War II, and his spiritual mission to provide instruction on Hermetic wisdom. In the novel, Frabato is a great adept who Demonstrates feats of real magic in his hugely popular stage magic show. He has refused init iat ion into the FOCG lodge, a black-magic order serving baphomet , whose members gain riches and power with the help of their own personal Demon assigned to them. There are 99 members in the lodge and 98 other secret lodges around the world, each with 99 members, all in pacts with Demons.

The riches come at great price, for upon death, the magicians must serve the Demons. Also, lots are drawn every year, and a member of the lodge is sacrificed to Baphomet. Members who break their oaths of secrecy are executed by magic, as are enemies of the lodge. The FOCG lodge tries to magically destroy Frabato by sending out death rays using a magical instrument called the tepaphone, but he outwits them.

Evocative of the novels of Dion Fortune—which also contain descriptions of real magic—Frabato the Magician has been published with added commentaries and notes.

In 1998, another work, Questions and Answers, was published, giving Bardon’s thoughts on 185 spiritual questions. The book was compiled by Czech students from his oral teachings.

Though cast in the form of a novel, Frabato the Magician is in fact the spiritual autobiography of Franz Bardon, one of the 20th century’s…

Considered by many the greatest adept of the 20th century, Franz Bardon survived Hitler's concentration camps but died a victim of Communist persecution in 1958.…

Initiation into Hermetics if the first and most important of Franz Bardon’s works and is rightly regarded as the cornerstone of his entire opus. In…

This new text by Franz Bardon not only contains the master keys to spiritual development, but also the universal keys to every element and to…

In the Key to the True Kabbalah, Franz Bardon demonstrates that mysticism of letters and numbers — the true Kabbalah — is a universal teaching…