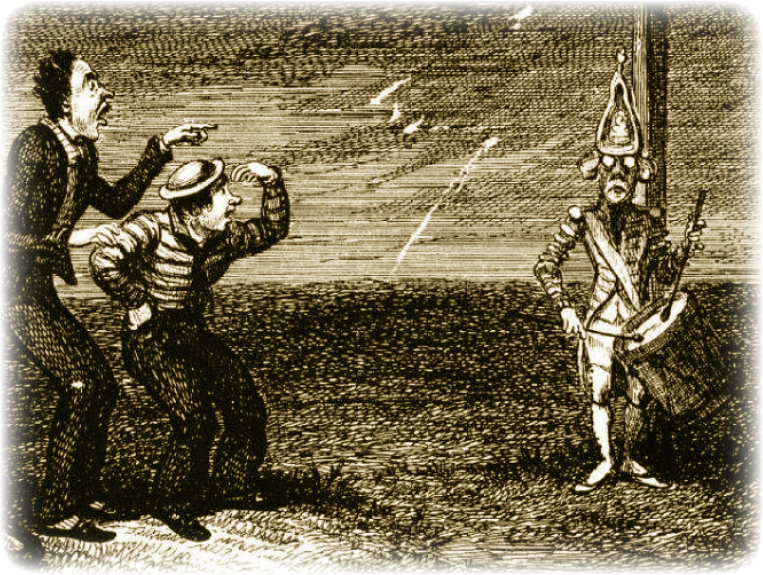 The Drummer of Tedworth was an English Poltergeist case for which a living agent, an irate man, took credit, and insinuated that his ability to cause the disturbances was due to witchcraft.

The case took place in 1661 in Tedworth, Wiltshire. In March of that year, an anonymous drummer began annoying the nearby town of Ludgarshall with his incessant drumbeating. He demanded money from the bailiff with what appeared to be a counterfeit pass signed by a Colonel Ayliff and a Sir William Cawly. John Mompesson, who lived in Tedworth, complained of the noise and also declared the pass to be counterfeit. Mompesson had the man, a demobilized Roundhead, arrested and his drum, confiscated. The drummer confessed his fraud and begged for his drum back. Mompesson refused, saying that he would get his drum back if Colonel Ayliff vouched for him. The bailiff took the drum.

The drummer soon persuaded the constable to release him, and he left the area. In April, the bailiff sent the confiscated drum to Mompesson, who was about to leave on a trip to London. During his absence, violent poltergeist activity erupted in his house, terrifying his wife, children and servants. The first disturbances were drumming noises heard outside the house and on top of it, which then moved indoors to the room where the confiscated drum was kept.

The noises, joined with other disturbances, escalated and seemed to focus upon the children. Objects were moved about; rude animal snortings, pawings and noises were heard; disembodied human voices spoke; and the children were pestered in their beds. Objects also were thrown at people in the house, and terrible Smells, including sulfur, wafted about. Drumming noises continued for days on end; after a short break, they would resume for days on end. The children and servants saw Apparitions, A ghostly drummer, from Barham’s Ingoldsby Legends. and the younger children were levitated in their beds.

Mompesson’s manservant woke up one night to see a dark body with red, glaring eyes staring at him from the foot of the bed; the apparition soon vanished. The family scattered ash on the floor to attempt to identify the culprit; the next morning clawlike marks were found in the ashes, along with unintelligible letters and numerous circles.

The disturbances went on for more than two years. They created widespread interest and drew curious visitors. They also caused the family much distress: servants were difficult to retain, skeptics derided the family, and the pious proclaimed that they were being punished by God for wickedness. Some of the lesser phenomena— scratchings and animal purrings and pantings heard near the childrens’ beds—were heard by Joseph Glanvil, who chronicled the case in Sadiucismus Triumphatus (1661). During Glanvil’s visit, one morning his horse appeared to be exhausted, as though it had been ridden all night (see Old Hag). It collapsed and died within days.

Other phenomena included glimmering lights that appeared in the children’s bedroom; a disembodied voice that repeatedly cried, “a witch, a witch”; the chasing of a servant by a stick of wood, while another was held by an invisible force; the sounds of coins jingling; doors opening and shutting violently by themselves; footsteps and the rustling of invisible, silklike clothing; lighted candles floating up the chimney; singing heard in the chimney; a horse found with its hind leg stuffed into its mouth so firmly that it took several men to pry it out with a lever; chamberpots emptied onto beds; a knife found in one bed; and pocket money mysteriously turned black. Through all this, the drum continued to beat.

Meanwhile, the drummer turned up in custody again and was tried and convicted for stealing. He was incarcerated at the Gloucester Gaol. He asked a visitor about news in Wiltshire. When the visitor said he had none, the drummer reportedly said,

“Do you not hear of the drumming at a gentleman’s house in Tedworth? That I do enough, I have plagued him (or to that purpose) and he shall never be quiet, till he hath made me satisfaction for taking away my drum.”

This remark earned the fellow a trial at Sarum on charges of witchcraft. He was “condemned to transportation,” or made to leave the area. It was rumoured that he raised storms and frightened seamen.

Despite his sentence, the drummer periodically returned to the area. As long as he was gone, the Mompesson house was quiet, but whenever he returned, the disturbances began again. It is not known if the Mompessons were plagued indefinitely.

In 1681, Joseph Glanvill published his treatise Saducismus Triumphatus, ‘Saduceism Defeated’ – meaning by ‘Saduceism’ the doctrine of the Sadducees mentioned in the New Testament,…

Hauntings by ghosts and poltergeists are sometimes blamed on witches and witchcraft, particularly in areas where fear of Magic runs high. In Brazil, for example,…

Willington Mill was a strange Haunting of a large house in Willington Mill, England, which involved noises, Levitation and movement of objects, mysterious rains of…

The Drummer of Cortachyis a Poltergeist haunting of the Scottish Earls of Airlie, the Ogilvys, of Cortachy Castle. The ghostly drumming was said to presage…

The Sauchie Poltergeist was a Poltergeist outbreak that occurred in Sauchie, Scotland, in 1960–61, centred around an 11- year-old girl. Various phenomena, witnessed by five…