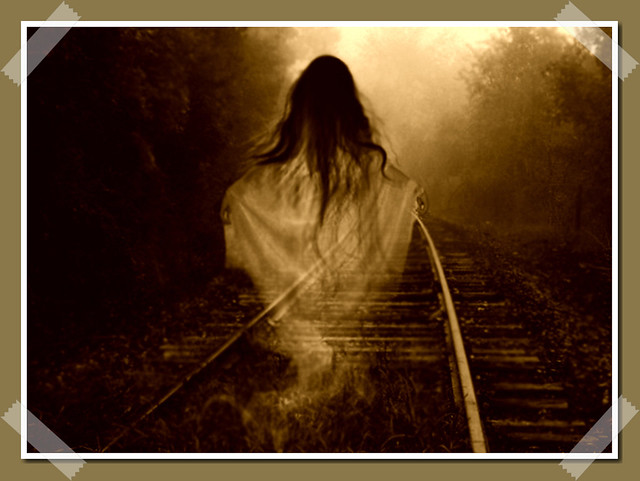 Phantom travelers are Ghosts of humans and animals which haunt travel routes, stations and vehicles. Phantom travelers are universal in folklore and legend. They are associated with tragedies that have occurred in the course of travel; with the lure and romance of travel; and with the strong emotions of meetings and partings. The tradition of traveling phantom tales is quite old, and was documented as early as the 1600s in Europe and Russia. Legends often grow up around phantom travelers.

The most interesting type of phantom traveler is the specter who appears real to the casual observer. Some hauntings include no visual Apparitions, but only sounds, lights, sensations, and Smells. Lord Halifax, who collected ghost tales of Britain, recorded one tale of a phantom traveler who rode the rails as a passenger. The account was given him by the nephew of a man, Colonel Ewart, who claimed to have encountered the spectral woman. Once on the train from Carlisle to London, Ewart secured a compartment by himself and dozed off. He awoke feeling stiff and strange, and suddenly noticed that a woman in black was seated opposite him. Her face was obscured by a black veil, and she seemed to be looking at something on her lap, though nothing was visible. Ewart spoke to her but she did not respond. She began to rock back and forth and sing a soft lullaby. However, there was no child with her.

Before Ewart could probe further, the train screeched and crashed into something. Ewart was knocked unconscious by a flying suitcase. When he came to, he left the train and ascertained that the accident was not serious. He then remembered the woman in black and returned to the compartment, but she was gone and was nowhere to be found. No one he questioned had seen her; in fact, Ewart was told that his compartment had been locked after he had entered it, as was custoMary, and no one had gone in after him.

Months later, Ewart was told by a railway official that the woman in black was a ghost who haunted the line. According to legend, she and her bridegroom had been traveling on the train when he stuck his head too far out the window and was decapitated by a wire. The headless body fell into the young woman’s lap. When the train arrived in London, she was found sitting in the compartment, holding the corpse and singing a lullaby to it. She never regained her sanity, and died several months later.

Other hauntings and phantom traveler legends center around railway and underground stations and airports. At the Darlington rail station in Durham, England, the ghosts of a man and a black retriever have been seen in the porter’s cellar. The ghost is said to be a man who committed suicide by throwing himself in front of a train. He had owned a black retriever. The phantom dog reportedly bit an old porter, but the bite left no marks.

At the Dearham Bridge station at Maryport in Cumbria, a baby’s screams still are heard on certain nights just before a train passes by. The story goes that one evening a couple were out walking with their baby, and the father inexplicably snatched the child and threw it over the bridge in front of a train. He was hanged for the crime.

At the Mayfield station in Manchester, the scene of at least two SUICIDES and other fatal accidents, phantom footsteps are heard on the platform. In London’s underground, the Aldgate station on the Circle line is one of several haunted stations, with so many sightings that they are entered into the station log.

Perhaps one of the most intriguing phantom travelers is a gentleman in a dark suit and bowler hat who has haunted Heathrow International Airport since 1948, when a DC-3 Dakota of Sabena Belgian Airways crashed on landing in heavy fog, killing all 22 persons on board. While rescue workers dug through the wreckage, they were interrupted by the man, who appeared suddenly out of the fog and said, “Excuse me. Have you found my briefcase?” Since then, the ghost has been seen numerous times at the airport, walking along Runway 2-8—right where the crash occurred. It is believed the ghost was a victim of the tragedy.

Other Heathrow ghosts include an invisible presence that pants like an animal down the backs of people’s necks, and “the ghost in the light gray suit,” a man who haunts the VIP lounges. One witness saw only the bottom half of the ghost.

Manchester International Airport also seems to be home to ghosts, including one of an old man seen daily in 1971 on the premises of C. Claridge & Co., Ltd., a freight forwarding company at the airport. The ghost was seen sitting in a storeroom and walking along barefoot. The haunting also included strange noises, an unexplained scream, and the movement of office equipment. The ghost has been seen sporadically since 1971.

Phantom travelers move about in the travel mode of their day: they walk, ride phantom horses, ride phantom bicycles or motorcycles, or drive phantom carriages, cars, buses and trucks. If on foot, they may suddenly appear standing in the middle of the road. Drivers of vehicles may swerve to avoid hitting them, sometimes causing an accident with their own vehicle, or may think they have struck the person. However, when they stop and inspect the area, there is no sign of anyone or any damage to the vehicle caused by impact. (See PHANTOM VEHICLES.)

In the United States, the vicinity of Elmore, Ohio is said to be haunted by a headless motorcyclist who appears yearly on the night of March 21, the anniversary of his death. According to legend, the cyclist was a young soldier who, after being discharged from the army after the end of World War I, bought a motorcycle to impress the girlfriend he had left behind. When he arrived at her farm, he was shocked to find out that she had become engaged to another man in his absence. He sped off on his cycle and lost control on a curve just before a bridge. He and his motorcycle hurtled into the ravine. He was decapitated and his headlight was shorn off. His phantom appears only as a speeding headlight which races down the road and vanishes halfway over the bridge. Legend has it that the phantom can be summoned on the death anniversary by blinking car lights and honking the horn three times each.

In 1968, two men tried to record the phantom on film and audiotape. They summoned the phantom twice. The third time, one of them stood in the middle of the bridge, and was found by his friend beaten up and lying in a ditch. He said he had no recall of what happened. Nothing showed up on the movie film. A strange light registered on the still film, and their audiotape recorded some odd, high-pitched noises, all inconclusive as evidence of paranormal phenomena.

Some phantom travelers seem doomed to eternal wandering as punishment for some folly or sin. The Flying Dutchman is perhaps the most famous example. Another such legend is that of Peter Rugg, which dates to the early 19th century in the Boston area. One eyewitness, a man named William Austin, claimed to have encountered the spectral Rugg in 1826 while riding in a coach out of Boston. Austin, who was sitting with the driver, noticed the horses becoming nervous. The driver remarked that the “storm breeder” was approaching, and they would encounter a storm, despite the fact that no clouds were in the sky. The “storm breeder” turned out to be a man and child in an open carriage accompanied by rain clouds. The driver related that he had seen the two often on the road, and that the man had asked directions to Boston but had paid no attention when told he was headed in the opposite direction.

Three years later, Austin, while staying in a hotel in Hartford, Connecticut, again saw the mysterious carriage, which was heading toward the hotel. Another man told him the occupants were Peter Rugg and his child; Rugg always asked directions to Boston but paid no heed to them.

Austin flagged the carriage down and, he claimed, carried on a conversation with the ghost. Rugg identified himself by name and said he lived on Middle Street in Boston. He and his child had left the city “some time ago” and had gotten wet in a rain shower. He asked Austin for directions to Boston, and refused to believe that he was in Connecticut. He drove off in a hurry.

Austin located individuals in Boston who told him the story of Rugg, a stubborn man who lived in Boston around 1730. Rugg had set out one day with his daughter to drive to Concord. On the return trip, he was warned by a friend that a storm was coming, but he vowed he would get home that night in spite of it, or never see home at all. He and his daughter never reached home, and never were found. Their ghosts, apparently, strive continually to reach home.

The Phantom Hitchhiker is another common phantom traveller.