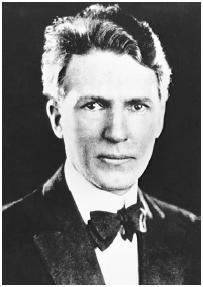 Hereward Carrington (1880–1958) was an English-born journalist and psychic investigator, author of many popular books on psychic phenomena.

Hereward Carrington was born in Jersey, one of Britain’s Channel Islands, on October 17, 1880. He received his early schooling in London and in Cranbook, Kent. His parents were agnostics; they raised their children with little or no religion, and encouraged them to think for themselves.

When he was eight, in 1888, Carrington’s mother took him on a visit to the United States. On board ship they met three German men who were acquainted with psychical research and who talked with Mrs. Carrington about the book Phantasms of the Living (by Edmund Gurney, Frederic W.H. Myers and Frank Podmore), which had then just been published. Carrington listened with rapt attention to the stories of crisis apparitions and the evidence for telepathy. He was fascinated as much by the stories as by their Scientific standing: all the cases had been investigated by the authors and were well documented.

But however intrigued he was, the experience aboard the Elbe was not enough to draw Carrington into psychical research. He was skeptical about all things of a supernatural nature. He was more interested in conjuring; he read up on the history of magic, and gave a performance at age 13. When he read some books that described the tricks of some fraudulent Mediums some years later, this only confirmed his skepticism about psychic phenomena. The book that finally changed his mind was Ada Goodrich Freer’s Essays in Psychical Research, which he read when it appeared in 1899. He joined the Society for Psychical Research (SPR), and the following year, at age 20, he moved to the United States, where he was to spend the remainder of his life.

Carrington first went to Boston, where an older brother was already living. His early years in the United States were spent working as a journalist, but he had already decided to devote as much time as possible to psychical research, and he got in touch with Richard Hodgson at the American Society for Psychical Research (ASPR) (at that time the SPR’s American Branch). After Hodgson died in 1905, the ASPR was reestablished in New York by James H. Hyslop, and Carrington joined the staff as an investigator.

His knowledge of conjuring now came in handy. In Personal Experiences in Spiritualism (1918) he tells of an investigation he made of a haunted town in Ontario, Nova Scotia in January 1907. The haunting turned out to be a practical joke by the entire town on their single spiritualist neighbor: they used pulleys and ropes to open doors and threw things around the shops when he was not looking. Later in the year, Carrington spent two weeks at the SPIRitualIST CAMP at Lily Dale Assembly, New York. He discovered that all 17 of the mediums working there were frauds, with the result that all except one (who was able to persuade the authorities otherwise) were not invited back the next year.

Carrington thought better of the Amherst Haunting, which he looked into on his way home from Nova Scotia, and in 1908 he had an impressive sitting with the famous mental medium Leonora Piper. Piper was in trance, lying with her head on the table with her face turned away, engaged in Automatic Writing. Carrington’s mother, who had recently died, was communicating; Carrington took a pair of small nail scissors that had belonged to her out of his pocket and laid them silently on the table, behind the medium’s head. Mrs. Piper immediately tried to draw a pair of scissors, and then “a little later a clearer attempt, coupled with the words, ‘Those were mine; I used to use them.’ ”

In the summer of 1908 Carrington went to Naples, Italy to take part in an investigation of the physical medium Eusapia Palladino. His coinvestigators, Everard Feilding and W.W. Baggally, were also knowledgeable about conjuring. In a series of Séances they discovered that Palladino would cheat if given the chance, but thatif she were restrained, she could produce genuine phenomena. In his book Eusapia Palladino and her Phenomena (1909), Carrington stated that he believed most of the attempts at cheating to be unconscious, due to the powerful urge to produce phenomena. If Palladino could cheat, she would; but if she were restrained, the results often were astonishing.

Palladino so impressed Carrington, in fact, that he arranged for her to visit the United States. She arrived in November 1909 and left in June 1910, having given 31 Séances. The first 27 of these were under Carrington’s supervision, and he restrained her when she tried to cheat. But the last four Séances were held at Columbia University in Carrington’s absence, and they were a disaster. Palladino was not restrained, and two detectives, hired for the purpose, were easily able to spot her tricks.

Carrington received a doctorate from William Penn College, in Iowa, in 1918. In 1921 he founded the American Psychical Institute and Laboratory in New York. The well-equipped laboratory was the only one of its day, preceding by a few years that of Harry Price and by several years the famous Parapsychology Laboratory established (in 1927) at Duke University by J.B. Rhine. Carrington’s institute closed after only two years; but it was to reopen a decade later.

Carrington was one of two American delegates to the first International Congress on Psychical Research held in Copenhagen in 1921, as well as to later Congresses in Warsaw (1923), Paris (1927), Athens (1930) and Oslo (1935).

In 1924 he was named to the Scientific American committee investigating the controversial mediumship of Mina Stinson Crandon (“Margery”). The committee sat with Crandon for two years, but eventually all except Carrington decided that she was a fraud. Carrington took a middle course; he acknowledged that there was some fraud, but thought that some part of the Mediumship was genuine. Carrington, however, may have been having an affair with Crandon, who was a beautiful and vivacious woman some years younger than her husband. Carrington’s friend Henry Gilroy later told his biographer Paul Tabori that they had met for several months “on the q.t.”

When a young man named Sylvan Muldoon approached Carrington about his “astral projections” (see Out-of-Body Experience), Carrington helped him to write the wellknown book, The Projection of the Astral Body (1929). It was followed several years later by The Phenomena of Astral Projection (1951).

In 1932 Carrington did some experiments with Eileen J. Garrett at the ASPR offices in New York, but this was at the time that Mina Crandon’s “Walter thumbprints,” supposedly those of her deceased brother, were being shown to belong to her very much living dentist. When the ASPR persisted in supporting the mediumship, Carrington decided he could no longer be associated with the society; he reopened his American Psychical Institute, where experiments with Garrett were continued in 1933.

The Garrett experiments were described in the institute’s first Bulletin. Garrett was given word association tests, both in and out of trance, and a galvanometer was used to record her brain waves. The results clearly showed a difference between Garrett in and out of trance, but because there were also differences between Garrett’s normal personality and her trance personality from one session to the next, Carrington’s conclusion was cautious.

In 1932 Carrington met Marie Sweet Smith, who became his wife. She also served as the institute’s secretary from the time it reopened in 1933. After the Garrett experiments, the institute’s main work involved the testing of a variety of instruments that had been used in research with mediums. Carrington described these tests in Laboratory Investigations into Psychic Phenomena (1939).

Carrington spent the last two decades of his life in southern California. There he revived his institute and expanded its activities, with the help of Henry Gilroy and his wife. The results of their investigations, however, were disappointing; they were unable to locate a single genuine medium or haunting. Carrington died on December 26, 1958, in Los Angeles, at the age of 78.

Carrington authored or coauthored more than 100 books and articles on psychical research and many other subjects, including bridge playing, nutrition, magic and yoga. His works on psychical research include, in addition to those already mentioned, The Physical Phenomena of Spiritualism (1907), The Coming Science (1908), The Problems of Psychical Research (1914), Psychical Phenomena and the War (1918), Your Psychic Powers and How to Develop Them (1920), The Story of Psychic Science (1930), Houdini and Conan Doyle, with Bernard M.L. Ernst (1932), A Primer in Psychical Research (1933), Loaves and Fishes (1935), Psychic Science and Survival (1947), The American Séances of Eusapia Palladino (1954) and The Case for Psychic Survival (1957). Two volumes of his essays were edited by Raymond Buckland and published under the title Essays in the Occult in 1958.

Even today, in the 21st century, much controversy rages over the existence of ‘psychic’ phenomena. This is a worthy and scholarly defence of establishing a…

Nandor Fodor (1895–1964) was a journalist, lawyer, psychoanalyst and psychical researcher best known for his pioneering theories on the psychological and sexual aspects of Mediumship…

Eusapia Palladino (1854–1918) was one of history’s most outstanding yet controversial physical Mediums, investigated by a record number of Scientific committees, largely in her native…