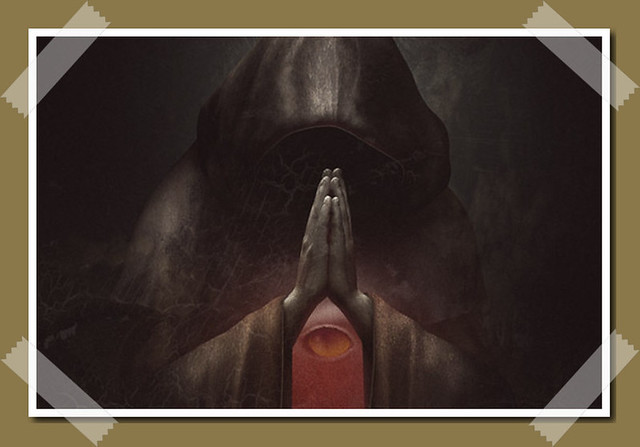 Phantom monks are Ghosts of monks and other ecclesiastical persons that haunt various religious sites: abbey ruins, churches and vicarages built on the sites of former monasteries, modern-day cathedrals and churches, and dwelling places.

Some ghosts are monks who suffered violent deaths for their faith during times of religious persecution, or monks, priests and clergymen who apparently wish to remain at beloved sites in spirit. Some phantom monks are seen walking alone or in processions. Others are heard chanting and singing and have even been said to speak to visitors.

In the United States, one of the most famous sites of phantom monks is St. James Sag Church in a Chicago suburb. The church, built in 1833, is the second oldest Catholic church in northern Illinois. The grounds have three buildings—the church, a rectory and Saginaw Hall—and a cemetery. No monastery ever operated there, but phantom monks nonetheless haunt the grounds. The area by the main entrance is known as “Monk’s Castle.”

Folk legend has it that if the phantom monks catch a person trespassing at night, they make him kneel down on ball bearings and pray all night long. St. James Sag has a history of hauntings dating to pioneer days that includes phantom carriages, a girl in white robes and a phantom stallion. The church is located near another famous haunted cemetery, the home of RESURRECTION MARY.

In November 1977, a Cook County policeman had an interesting encounter with the phantom monks of St. James Sag. The officer was driving by the church’s cemetery at about 2:30 A.M. when he saw eight or nine figures in hooded robes walking inside the gates. He called to them to come out and be arrested for trespassing. The monks paid no attention to him but continued walking up a hill. The officer took his shotgun and pursued them. He stumbled around in the dark, but the monks seemed to glide over the uneven ground. When the officer arrived at the top of the hill, the monks were nowhere to be seen. He searched the entire area and found nothing.

Numerous phantom monk hauntings are reported throughout Britain. In Canterbury, Kent, the old cathedral, completed in 597, is haunted by an unidentified phantom monks 371 hooded monk sometimes seen in the cloisters in the evenings. Another ghost is believed to be Archbishop Simon Sudbury, killed in 1381. His torso is buried at the church, and his head is buried at a churchyard in Suffolk, where he was born. Sudbury’s ghost is described as “a dignifi ed character with a grey beard and a fair complexion.”

At the ruins of Whalley Abbey, witnesses have heard the singing of a Te Deum and have seen a procession of monks with heads bowed and hands clasped together as if in prayer. The monks first came to Whalley in the 13th century, but the property was forfeited to the state after the abbot, John Paslew, was tried and executed for treason in 1537. Paslew’s ghost is often accompanied by Poltergeist activities.

Two phantom monks have appeared at Chingle Hall, a 13th-century house located 6 miles north of Preston. During the 16th-century Reformation, the Catholic owners, the Singletons, allowed secret Masses to be held and priests to be hidden in its myriad rooms and passages. In the 17th century, the house passed to relatives, the Wall family, and it became the birthplace of St. John Wall, hanged for his religion in 1679. According to lore, his head was brought back to the house and buried in its cellars. His ghost has been seen in the house and on the grounds, often accompanied by footsteps, stamping feet, scratchings, rappings and tappings. Visitors report such strange occurrences as objects and wall pictures moving, as if by invisible hands. People have reported being touched by the ghost, from a gentle placing of a hand on a shoulder to a forceful shove across the room.

Mowbreck Hall, located a few miles north of Kirkham, was owned by the Westby family, relatives of the Haydock family. George Haydock was a priest and was arrested for his faith in London in 1583. At the very time of his arrest, his father, Vivian, was celebrating an illegal Mass in the private chapel at Westby. He had a vision of his son’s bleeding head floating above the altar, collapsed and shortly thereafter died. In the following year, George was hanged, drawn and quartered. His severed head is encased in glass and sits in the attic chapel of Lane End House, Mawdesly. Witnesses claim that they have seen the blood-dripping head hover above the altar. Unexplained footsteps, loud, strange noises and other poltergeist disturbances are said to have plagued subsequent owners.

It was at Smithills Hall, a few miles northwest of Bolton, that Rev. George Marsh, a Protestant vicar of Deane, was accused of being a heretic because he refused to respect the papacy. During an interrogation, Marsh protested by stamping his foot on the fl agstone floor. He later was burned at the stake in Chester, but his footprint can still be seen, and it reportedly becomes wet and red once a year. Once, two boys are said to have removed the stone and thrown it into a ditch. Such terrifying noises were heard that the boys confessed and the stone was put back. The ghost known as the “Black Canon” haunts Bolton Priory, 8 miles east of Skipton. The ghost is so called because it is dressed in a black cassock, cloak and hat. According to eyewitnesses, the ghost visits the ruins, sometimes in daylight, and appears to be a man in his late 60s. Some phantom monks allegedly have spoken to visitors, giving them advice or instructions.

At Bury St. Edmunds in Suffolk, the site that once housed the shrine of St. Edmund, King of the East Angles, who was murdered by the Danes in 870, a local rector was given information by a phantom monk for a book he was writing about the saint. The monk reportedly said that the saint’s body had been removed from its tomb and safely buried elsewhere in the church in order to protect it against defilement.

In 1928, a visitor to Beaulieu Abbey, in Hampshire, was of service to a phantom monk who told her to dig in a certain spot, where she found a coffer with two round stones and some bones. She gave them a Christian burial, and since that time, phantom monks have been heard chanting. In addition to a speaking phantom monk, there is a ringing phantom bell at the vicarage of Elm in Cambridgeshire, which stands on the site of a 12th-century monastery. The ghost reportedly told the vicar’s wife that he was Ignatius, the bell ringer. Villagers had reported that the sound of the bell foretold a death in the parish within the next 24 hours. The ghost explained that his job had been to sound the bell when the floodwaters were rising.

One night he had fallen asleep and failed to warn the brothers when the water became too high. The water rushed into the monastery, and some monks drowned. This same vicar’s wife claimed that she was the victim of an attempted strangulation by a ghost while she slept. She related the story to the phantom monk, who told her that the room where she slept had once been the scene of a murder and the victim’s spirit had attacked her. It further explained that it had stopped the attack, a move that it hoped would count toward completing its penance for the loss of brother monks.


Wicked Northern Illinois: The Dark Side of the Prairie State – Troy Taylor

Spirit of Orléans (1534) Fraudulent Exorcism plot perpetrated by Franciscan monks in Orléans, France, for money. In the 16th century, it was custoMary to follow…

Southery ‘The Legend of the Southery Wolf-Hound’, told by W. H. Barrett in Tales from the Fens (1963), says that, when Southery was an island,…

The Mont Saint Michel— which stands on an island off the coast of Normandy—might be gorgeous whichever way you look at it, but for an…

A phantom fountain of blood is said to appear at this haunted abbey, constructed by William I (William the Conqueror) on the site of his…